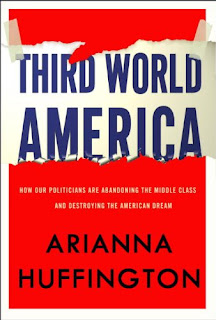 This book was a waste of time.

Don’t get me wrong, I’m a fan of Arianna Huffington. She’s incredibly well-spoken, fairly forward thinking, and generally impressive. Her status as a powerful 21st century woman doesn’t hurt either. But Third World America isn’t what I would call her crowning achievement.

To start, I find it somewhat odd that Arianna would bother to write a book in the first place. After all, isn’t this the woman who undermined print journalism (itself a daily operation) in favor of the minute-to-minute coverage that is The Huffington Post? Third World America, though full of compelling statistics and arguments, can’t help but already seem dated. Many of the numbers have no doubt changed in the year-plus since the book was published, and many of the topics have advanced, either incrementally or by massive degrees (the book predates the recent “shellacking” in Congress, as well as everything going on right now in the Middle East). Books on current events can’t help but be felled by the rather slow process that is book publishing; it just feels extra odd that the woman behind such a huge disruptor of old media would have bothered with one at all.

In truth, I wonder whether the medium in general was a bit lost on Arianna (it shouldn’t have been; this is her 12th book). As I mentioned, Third World America is chock full of facts and figures, but doesn’t otherwise ever seem to find a level of depth I expect from nonfiction, and even more from nonfiction books presented as arguments. If you’ve been following economic news over the last two years, nothing in Third World America will come as a surprise to you, or even an “aha” moment. In fact, many of the numbers and quotations Arianna uses are from reports that have been covered by the press, or articles from the press itself (one may have been better served reading the New York Times’ business section over the last 18 months). It’s somewhat ironic that the founder of The Huffington Post, arguably an aggregate of other news, would have penned a book with such similar qualities. Or I guess not ironic at all.

[Sidenote: I take particular issue with one section of the book where Arianna lays into the mainstream media for failing to report on the impending economic disaster before it all went down. Sure, we all know now that there were many distinct voices warning of the financial crisis in the years leading up to it, but to pretend that only traditional media were ignoring those voices is to suggest Ms. Huffington hasn’t looked at her own site in the last two years. In example, she mentions the media’s inane focus on Balloon Boy, which I’m more than certain dominated the front page of HuffPo right alongside every other media outlet. In fact, people often refer to The Huffington Post as one of the most apt examples of vying for page views over journalistic accolades. (As I write this, the HuffPo homepage is full of updates on Libya, but the most popular story is Johnny Depp discussing Angelina Jolie’s mothering style.) Ch’mon Arianna, don’t bite the hands that feeds.]

The book does lay out some distinct proposals for improving the country, many of which I agree with, some of which I don’t, and I would argue that these are the only elements of Third World America that you might not find elsewhere (or that are at least presented more succinctly than one might find elsewhere). But even here, I found my interest stymied by mediocre writing — again, the lack of depth can make the book feel like one really long HuffPo opinion piece — and Arianna’s penchant for overwrought analogies and wordplay. (Example: “Forget Freddy Krueger. The real nightmare is not happening on Elm Street. It’s happening on Main Street.” Example: “Watching the unrelenting geyser-like spew, it struck me as an inverse visual for the plight of America’s middle class: While the thick black oil was being pushed inexorably upward, hour after hour and week after week, the quality of life for tens of millions of hardworking Americans is being pushed inexorably downward–month after month after month.”) Gag.

Arianna Huffington is a very smart woman, and as such I can’t blame her for wanting to write a best-seller, even if the logic behind it still confounds me (i.e. “I founded one of the most highly trafficked sites on the Internet, but you know what, I think I’ll write a book. Bound to reach more people that way!”) Third World America is a clean and informative introduction to what’s wrong with the country today (or at least what was two years ago) and anyone who doesn’t have their nose perpetually in the business section of the Times or Wall Street Journal would be well-served by absorbing all of this calamitous information in one fell swoop (I should note that it’s an incredibly fast read.) But for everyone else, those who have been following the news, much of this will come as a recap of things you already know, with very little else. Sure, Arianna has some good suggestions for getting America on the up and up, but she could have saved me 250 pages and just written a really nice HuffPo article.

One thought on “Stick to inventing democracy”